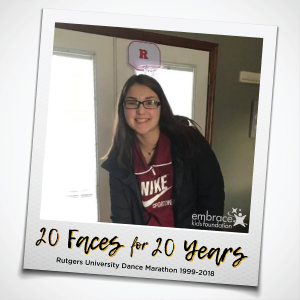 Mikayla McLaughlin is a first year at Rutgers University within Mason Gross School of the Arts. As a first year, Mikayla is already getting involved on campus. Recently, she got a job at the Douglass Cafe and is a Captain for this year’s Dance Marathon. She is a captain on the Event Logistics team and will be working under Zone Management. Mikayla’s experiences with Rutgers University began before she, herself, became a student. Mikayla’s brother Nico is an Embrace Kid. Nico is six years old and was diagnosed with Evans Syndrome. Evans Syndrome is a rare autoimmune disorder that affects the red and white blood cells within the body. Nico loves clinic visits as he gets to see some of this favorite people, Embrace Kids Foundation Employees. He always talks about Dance Marathon. Mikayla notes how mature Nico has got from being with his college friends.

Mikayla’s father has always pushed for her to go to Rutgers University but she was hesitant and thought she did not want to go to Rutgers. However, that changed. Mikayla’s mother was an opening speaker at RUDM 2016. Mikayla notes that when you leave Rutgers Dance Marathon, you leave feeling like a new person. After experiencing her first Dance Marathon she thought, “Maybe I’ll go to Rutgers”. As she applied for schools such as Pace, Montclair, and Towson she said if I get into Rutgers I am going. And in early December, she heard back from Rutgers and made the decision to accept! Coming to Rutgers, she knew she had to get involved with Rutgers University Dance Marathon. She did not want to pass up the opportunity. She went to an interest meeting on Douglass Campus, got an interview, and joined the team. Prior to being a part of the team, Mikayla and her mother talked about how nice everyone is from Dance Marathon and still sees that through her experiences this year. She has also seen how really student run the event is! She recognizes how much two days can really mean.

Throughout all of her experiences Mikayla has been able to become more independent and come out of her shell. She also has a new perspective and view on life and is so much more thankful for everything now. She commented that people need to realize how lucky they are. Despite everything, she realizes the importance of seeing the good side of life. She has loved to see all the families involved with Embrace Kids Foundation grow together. She has also used dance as a way to express herself, her passions, and her emotions. She was upset to miss Dance Marathon last year because of a dance competition but will not be missing it this year. She enjoys being here as it still allows her to be close to her family, who mean a lot to. Mikayla believes she is meant to be at Rutgers and involved within this organization!