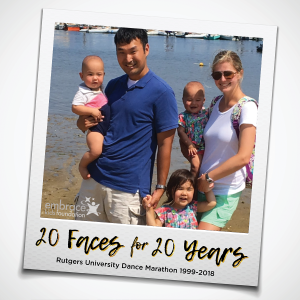 Jen and Bill Starnick are a married couple, whose roots go back to their own days with Rutgers University Dance Marathon. Bill majored in accounting and economics with a minor in mathematics during his time at Rutgers University. Bill started his RUDM experience in 2005, as he danced for his organization, Chi Psi. He danced that year and the next. After that, he saw the possibility for growth and change within the organization and eventually became the Director of Finance in 2007. That year Jen was the Assistant Director of Finance. As a member of Delta Gamma, she danced in 2006, becoming an Assistant Director the next year, and eventually, also, became a Director of Finance for the Marathon. Jen received two masters degrees from the Graduate School of Education at Rutgers, worked with RUDM as a Graduate Assistant for three years, and was one of four people to start the RUDM Alum group. She has not missed a Marathon since 2006!

Jen’s first experience with DM was alongside her pledge class with Delta Gamma. At family hour she had the opportunity to hear a family from Embrace Kids Foundation speak. The mother had shared that on the way to the Marathon she had asked her daughter, who was undergoing treatment at the time, what she should tell the students. Her daughter responded with, Mom tell them we’re proud of them. This moment is her WHY moment. This moment has stuck with her throughout these years, impacting her greatly.

As members of the Dance Marathon community, they have been able to see the organization and event grow and evolve. They have both been able to see the support of the university and community grow for RUDM. They have both seen the positive impact of this throughout time. They have seen the numbers of dancer grow. The more support there is, the more Rutgers University Dance Marathon will grow and change for the positive. They also recognize how invaluable the staff and advisors have been over the years. Especially noting the support from Dean Arnholt and Carey Loch. Jen recognizes her year on the board was a turning point for Rutgers Dance Marathon.

The impact of Dance Marathon has gone beyond just the their time at Rutgers. Jen even jokingly said that she did not know where she would be in her life without Dance Marathon. Not only did it give her an amazing resume, developed her professionally, and gave her skills but it gave her something even more important. It gave her lifelong friendships and she met her husband there.  One of the other Assistant Directors was one of the groomsmen at their wedding and their child’s godfather. Bill is still in touch with those in his fraternity that were also involved in Dance Marathon. They were a close knit group because of that. They had common bond and passions. He also notes the event is a great excuse to come back to New Jersey and has had a huge positive impact on him. Jen notes that there is nothing else like the personal attachment and bond that Rutgers Dance Marathon and Embrace Kids Foundation has. There is nothing else like it. “