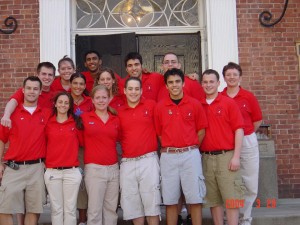 The beginning of Dance Marathon at Rutgers University dates back to the spring of 1971. Seven members of the Zeta Beta Tau fraternity, Bob Schultz, Bob Mannis, Bruce Goldman, Steve Gerber, Richie Goldman, Erwin Shustak and Louis Scholnik along with students from Douglass College, Cheryl Biber and Hannah Gonski, held the first Dance Marathon in the College Avenue Gym. With few exceptions, the participating organizations were fraternities. In its first year the ZBT Dance Marathon raised over $18,000 for the American Cancer Society. Over the years, the event was expanded to include the entire Rutgers-New Brunswick community. The final Marathon coordinated by ZBT benefited the Central Jersey Chapter of the Multiple Sclerosis Society in 1987. After raising over $700,000, the concept of a Marathon on the banks was lost until the fall of 1996.

Under the leadership of JoAnn Arnholt, the Dean of Fraternity and Sorority Affairs, discussion began with representatives from the Children’s Miracle Network about restarting a Dance Marathon at Rutgers University. Unfortunately, the project was initially delayed, as attempts to organize a Marathon in 1996 and 1997 were poorly supported. Entering the spring of 1998, the Marathon was a noble idea with little support. However this would all change in the spring of 1998.

Strong student leadership emerged as the Interfraternity and Panhellenic Council Presidents, Tony Solimine and Nicole Ahmed, met with Dean Arnholt and vowed that the first annual Dance Marathon would occur in March of 1999. Solimine volunteered to be the Director, and recruited the first steering committee consisting of ten members. The Steering Committee’s year of hard work and dedication to excellence were rewarded when the Rutgers University Dance Marathon 1999 set the record for the total amount of goods, services and monies donated by any first year Dance Marathon at $113,000. In 2000, the students agreed that partnering with a local charity would be more appropriate. That year, the partnership with the Institute for Children with Cancer and Blood Disorders, now known as the Embrace Kids Foundation, began and continues to grow each year.

Take a look through our Facebook Timeline to see how much we’ve raised over the years!