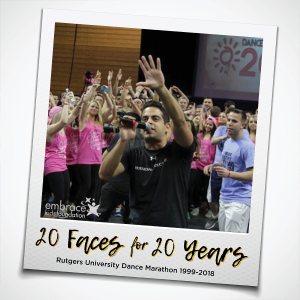 Vincent Velasquez first experience with Rutgers University Dance Marathon came within his first year at Rutgers University. However, his time and involvement with the Marathon has gone beyond his years as a student at the University. Through peers and his fraternity, Vincent was exposed to Dance Marathon. In his first Dance Marathon, he participated as a volunteer and was there to really support and encourage his brothers within his fraternity. During this experience, he noticed a bit of a lull in the entertainment. At this time, as a first year volunteer, he asked the DJ at the time to play “Blame it on the Boogie” by Michael Jackson. He then got up on stage and danced. This may have been the first time that he provided some entertainment for RUDM but it was not last. This coming year will be his fourteenth Dance Marathon and the eleventh Dance Marathon for Hurricane Productions, the company in which he currently works for. Through Hurricane Productions’ time with Dance Marathon they have grown along with the Marathon.

From an entertainment aspect there was not the structure that there is today with the Marathon and this growth in structure is thanks to the hard work of all those in Hurricane Productions and their collaboration with RUDM. When Vincent approached Dean Arnholt about being involved with this event from an entertainment stand point, he explained that he was in it for the long haul. As long as they kept asking him to return with his team he would be there. From there, a relationship was born and grew into what many get to experience today at RUDM. In 2008, Vincent MCed the entire event. Now there are students being trained as well to MC and even be involved as DJs at the event. Through Hurricane Productions’ work with Dance Marathon they have inadvertently developed this sort of program with Rutgers. They are helping grow student DJs. As with Student Athletes, these Student DJs are students first and DJs second. This is something that they believe in with the culture within their own company. Things that were being done by professionals three years ago are now being done by students. When describing the event, RUDM describes its cause and explains that, the Rutgers University Dance Marathon is a student-run philanthropic event that unites the Rutgers community in an effort to raise money and increase awareness for Embrace Kids Foundation. Hurricane Productions embodies this, aides in bringing more students into the event in different capacities, and futhers the events ability to unify all parts of the Rutgers community.

Vincent explains that gearing up for RUDM is a very collaborative process across the board from administrators to professionals to students. This event is something that is a full year commitment to the staff. He constantly reminds the staff on how important Dance Marathon Weekend is. For them, there is a real “Dance Marathon Season” as they prepare for the event. At this time, this is one of the largest operational events for them and a huge priority. At one point it was the largest but as the company as grown there are larger events. However, this is one of their favorite events. Vincent also explains that RUDM is one of their only events that uses the company’s full capabilities. Not only does this event help to utilize all their current capabilities but gives them an opportunity to delve into new initiatives and innovations. He explains that it is this testing ground for things that will only help to improve the Marathon as a whole.

There are individuals within Hurricane Productions that have had the opportunity to be involved with this relationship, event, and journey for the last eleven years. However, those who have moved on in their careers still come back for this weekend in March or April. Vincent explained that there are some people who have moved on to working in the city but still take that time, even if it just be a few hours, out of that hustle and bustle to come back to this event. This shows the relationship of this company and event and the family unit that is Hurricane Productions.

Throughout his time working with Rutgers Dance Marathon in different capacities, Vincent has seen a multitude of what he calls “Dance Marathon Moments”. He discusses this with his staff. Each year these moments happen and they happen at different times, not just Dance Marathon weekend. It could be in the fall, the winter, or even a hospital visit. One moment that sticks out for him is his first hospital visit. He had done philanthropy work in high school but never like this. This gave him the opportunity to help distract or alleviate things that were going on in the lives of the children and their families. This was just the beginning for his work with Embrace Kids Foundation directly. In the past and currently, he has worked with Embrace Kids Foundation to create content for them and aide in providing entertainment for Dance FTKs at high schools. This foundation is one they believe in and support as a company.