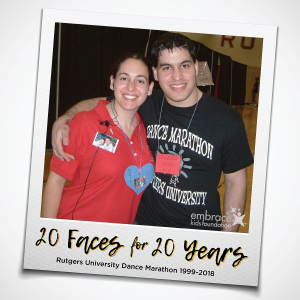 Most may know Amy as the energetic Jazzercise instructor who performs at Rutgers Dance Marathon. However, many do not know how involved Amy was with RUDM before she was on stage dancing. Amy was a Director of Fundraising and then an Entertainment Captain of the RUDM executive board during her two years of graduate school at Rutgers. Amy’s favorite DM moment was during her time she did DM with her younger brother. For DM 2006, Amy’s family hosted a canning weekend with the steering committee at their house and canned all day Saturday and Sunday. They were able to raise over $4,000 that weekend and she was able to see people come together and see what they were capable of.  During her first experience performing Jazzercise at the RAC, Amy admitted she was nervous but the crowd blew it out of the water and the instructors and herself were incredibly impressed, and she describes the energy as astounding. Amy described her reason for always smiling and having fun at the marathon: “You’re standing up and helping the families. This is their Disney in New Jersey, their special place away from Cancer where the marathon makes the weekend magical.”